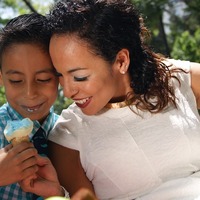 Can you draw a cow licking an ice cream cone?

Did you know: A cow gives enough milk to make two gallons of ice cream per day.

Can you draw a new way to eat ice cream... it can be serious or funny?

Did you know: Ice cream cones were invented during 1904 World's Fair in St. Louis, when large demand forced ice cream vendor to find help from nearby waffle vendor. Together they made history.

Can you draw the original ice cream... what did it have in it?

Did you know: No one really knows who invented ice cream. We have bits and pieces of information. It’s enough to put together a basic story, but we don’t have all of the answers. In Ancient Rome, Emperor Nero enjoyed mixing snow with fruit and honey. He frequently sent messengers out to gather snow from the mountains. Some historians credit Marco Polo with being the first one to bring some type of ice cream to Europe. He had learned it from the Chinese, who had flavored snow with rice and milk to make a creamy dessert.