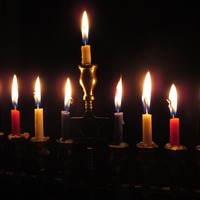 Can you draw Menorah?

Did you know: The menorah is a special candelabrum with 9 candles. Each day an additional candle is lit. The ninth candle is called a shamash. This candle is generally in the middle and set higher from the other 8 candles to separate it from the rest. It is the only candle that is supposed to be used for light.

Can you draw Why are jelly donuts?

Did you know: And on Hanukkah, it’s traditional to eat lots of sufganiyot. Because of the crucial role that oil plays in the holiday, fried foods are a major food group during these eight nights, hence the beloved jelly donut. Got more of a thing for savory treats? Latkes, or potato pancakes, are also awfully popular.

Can you draw a dreidel?

Did you know: Jewish children often play a game called dreidel. The dreidel is a four-sided spinning top, each side having a Hebrew letter. The fire letters (nun, gimel, hey, shin) stand for the Hebrew phrase, "Nes gadol Haiya shaam," meaning, "A great miracle happened there." In Israel, by contrast, the dreidel reads "Po" instead of "shaam," meaning "here." So in Israel the phrase is, "a great miracle happened here."