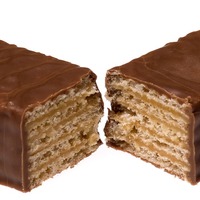 Can you draw a magical power that chocolate can give you?

Did you know: Ancient Aztecs thought chocolate had magical powers; like the ability to give them strength. While cookies and pastries containing cocoa have been produced for centuries, the commercial version of the chocolate wafer got its start back in 1924, when the National Biscuit Company (now simply known as Nabisco) began selling them in tins along with sugar wafers and ginger wafers.

Can you draw a Kit-Kat bar?

Did you know: The Kit Kat’s unique square-ish shape came about because Rowntree’s wanted to make a bar that workers could stuff inside their lunch sacks. An employee at Rowntree’s proposed the idea: “A chocolate bar that a man could take to work in his pack up (packed lunch).” The company developed the shape, further distinguished it by dividing it into four sections, and wrapped it all inside bright red packaging.

Can you draw your own NECCO flavored wafer?

Did you know: NECCO stands for New England Confectionary Company. It’s the oldest candy company in the U.S. Although the wafer was invented in 1847, the company wasn’t called NECCO until 1901 when the wafer maker merged with 2 other candy companies. The original 8 flavors are the lemon, lime, orange, clove, cinnamon, wintergreen, licorice, and chocolate.

Source: Do You Remember