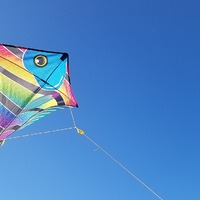 Can you draw a kite carrying something?

Did you know: When the Japanese were building some of the early temples and shrines they used large kites to lift tiles and other materials to the workmen on the roof. There are over 50 million kites sold in the USA every year. The smallest kite in the world which actually flies is 5mm high.  The largest number of kites flown on a single line is 11,284, this record is held by a Japanese kite maker. The longest kite in the world is 1034 metres (3394 ft).

Can you draw a kite made from leaves?

Did you know: It is now thought that the first kites flown over 3000 years ago, were made from leaves. The Maori tribes from New Zealand made beautiful birdman kites made from bark cloth and leaves.

Can you draw something you can learn with the help of a kite?

Did you know: In the 18th and 19th centuries, kites were used as vehicles and tools for scientific research. Men like Benjamin Franklin and Alexander Wilson used their knowledge of kite flying to learn more about the wind and weather. Sir George Cayley, Samuel Langley, Lawrence Hargrave, Alexander Graham Bell, and the Wright Brothers all experimented with kites and contributed to development of the airplane.