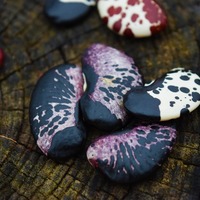 Can you draw a ship carrying lima beans?

Did you know: Early explorers coming to America first learned about lima beans from native Indian tribes. Unlike maize, which is high in starch and low in protein, lima beans are rich in proteins and furnished protein to the Central American Indians who then ate almost no meat. Lima beans dried well, making them easy to store and transport, so merchants and explorers started stocking them in their ships when exploring early America territories. They also carried these plants to other corners of the world such as in 1591 when they brought them to Europe. By the latter part of the 18th century lima beans were considered an ideal food worldwide.

Can you draw what you will need to cook a cup of lima beans?

Did you know: To cook lima beans, place them in a pot and add three cups of fresh water or broth for each cup of dried beans. The liquid should be about one to two inches above the top of the beans. Bring the beans to a boil and then reduce to a simmer, partially covering the pot. Lima beans generally take about 45 minutes to become tender when cooking this way. Lima beans may produce a lot of foam during cooking. Simply skim any foam off during the first half hour or so of the simmering process. Because of the foam limas often produce, it is recommended to avoid cooking them in a pressure cooker.