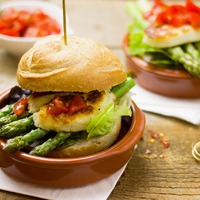 Can you draw your own recipe for a veggie burger?

Did you know: This healthy option was originally invented by a man named Gregory Sams in 1982. During the 70s and 80s, Gregory Sams and his brother Craig were all about the Vegetarian diet, having opened a vegetarian restaurant named “Seed” in London. The menu was inspired by Japanese cuisine and even admired by celebrities such as John Lennon and Yoko Ono. From that success, the brothers opened a health food company. When it started to struggle financially, Gregory went into his lab and concocted a vegetarian burger, which he named “The VegeBurger”, to save the company. The first “VegeBurger” used a recipe of sesame seeds, rolled oats, wheat protein, soy, onions, and a dried tomato. First impressions were mixed, but the trend would catch on and would start flying off shelves.

Can you draw some great vegetables, and be sure to make them colorful?

Did you know: Vegan foods are free of all animal products such as meat, eggs, fish, and dairy. Vegan living often reduces the intake of saturated fat, animal hormones, and cholesterol while increasing the intake of fresh fruits and veggies. That has the potential to reduce the risk of cancer, diabetes, obesity, and heart disease.

Can you draw some delicious beans and beets?

Did you know: These veggie burgers are a mix of garbanzo beans, black beans, beets (!!), heirloom pink rice (can we talk about my love affair with fancy rice?), a bunch of spices and some red onion. They’re vegan, too! No egg to hold them together – the coldness from the fridge helps bind them. It’s vegan science.