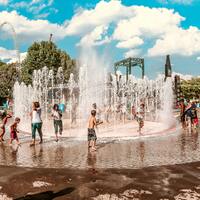 Can you draw a waterslide that would be fun to ride?

Did you know: The idea for the waterslide was conceived in Minnesota, of all places. Faribault resident Herbert Sellner came up with the idea in 1923 when he built a large wooden slide that emptied out onto the water. Known as the Water-Toboggan Slide, Sellner’s invention was a quick hit, and he later went on to invent other amusement park favorites like the Tilt-A-Whirl in 1926.

Can you draw what the first water park may have looked like?

Did you know: In 1894, Paul Boynton opened the world’s first modern amusement park. It was located in Chicago and was called “Paul Boynton’s Water Chutes”. It charged an admission to get into the enclosed park and used rides to draw people to it. In 1895, he also opened a park at Coney Island.

Can you draw your favorite ride in an amusement park?

Did you know: George Millay had founded Sea World in 1964 in San Diego and later opened similar parks in Ohio and Orlando, Fla. In the 1970s, he saw the potential for a park built around water attractions, and in 1977 he opened what is considered the first water park, Wet n’ Wild in Orlando, according to Waterpark.com. The parked proved so popular that he opened more in the United States, Mexico and Brazil. From the viewpoint of the history of water slides, this was a particularly important step.