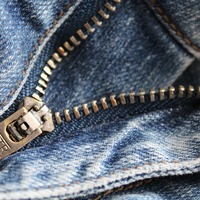 Can you draw some items you know that have zippers?

Did you know: There are 4.5 billion zippers of all kinds consumed in the U.S. per year. That's 14 zippers for every American per year. Every year, YKK produces enough zippers to wrap around the world 50 times. That's 1.2 million miles of zippers! The national Manufacturing Center of YKK in Macon, Georgia produces around 65,000 miles of those zippers annually.

Can you draw a boot with a zipper?

Did you know: If you've ever been told to zip it chances are they weren't talking about your sweatshirt. If you are from Akron, Ohio you probably are familiar with B.F. Goodrich would used zippers in their boot in 1923 and the sound of the zipper closing, the zippppp, gave birth to the name Zipper.

Can you draw a shirt or pants with lots of zippers?

Did you know: Zippers really took off in 1937, when they caught the attention of a number of French fashion designers. In 1954, Levi’s introduced a special zippered version of its overalls called the 501Z, replacing the button-fly. The company eventually brought in zippers across its line of jeans, but not until the 1970s.