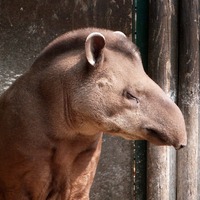 Can you draw a baby Tapir (it looks like a watermelon with legs)?

Did you know: Tapirs have a relatively long gestation period of 13 months and only give birth to one baby at a time, according to the International Union for Conservation of Nature (IUCN) Species Survival Commission. The offspring, called calves, can stand a couple hours after birth and weigh 15 to 22 lbs. (7 to 10 kg). They look like brown-and-beige-striped watermelons on legs, according to the San Diego Zoo. The pattern is good for camouflage, but they lose the stripes as they get older.

Can you draw a Tapir doing the doggie paddle in the water?

Did you know: Tapirs are fast swimmers and will often use their trunk like snouts as a snorkel when diving deeper, closing their nostrils to avoid water getting in, however they mostly swim with their heads out of the water. They use a doggy paddle stroke or use the bottom of the lake to propel themselves along. Tapirs will often run into the water to escape from predators, and some species will also only poop in the water to avoid their scent being detected.

Can you draw a Tapir wiggling its nose?

Did you know: They can wiggle their nose and use it to grab while foraging. When swimming, they can use it as a snorkel! They have thick skin on the backs of their neck that helps to protect them from threats like jaguars, crocodiles, anacondas and tigers.